She shares her story of how she was mis diagnosed in Manipur when she initially went to consult Doctors. She was given medication based on the symptoms given by her, the doctor DIDNOT check her body, there was no x-ray or any follow up. Later, when he was in Delhi, it was found that she has colon Cancer and she came out as a cancer survivor after her surgery. Listen to her amazing story on her journey going through such hard times as a family.

Before being diagnosed with colon cancer, Sanahanbi participated in the half marathon 21 kms at the Asian Veteran Sports Championship held in China and won the gold medal. Listen to her interesting incident of getting lost 🙂

She also came fourth in 42 kms full marathon held at the world veteran championship Brisbane, Australia. It is amazing to hear how she completed 42 kms , the joy and excitement of people once she reached the destination.

She has very interesting broad outlook on diversity and mixed marriage, on love and relationships. She was awarded Best Mother 2002 in Manipur. This is an amazing treat to listen to her. She even shares how she met and got married.  She is involved in many Social organizations (Nupi Yaipha Lup, Advisor of Manipur State Pensioners association etc.) and remains active in participating many social causes(Look at her picture participating in the Protest against the Gang Rape in Delhi) at her age. Hats off to her, we have a lot of things to learn from her.

It is such a pleasure listening to her story and I love the way she tells it with her infectious laughter.

Music: Nuja Kanagee Chenglouno Chenglouno by N. Pahari (This was a very popular songs during the time Ema Sanahanbi was growing up and she had mentioned it very fondly during the interview) 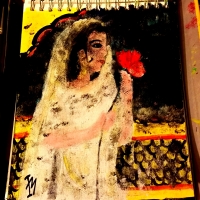